The Title China Uses To Claim Taiwan Is A Fake

Mr. President,
The Chinese Delegation is strongly opposed to including item 159 of the draft agenda in the agenda of the fifty-ninth session of the General Assembly. A very few countries have once again raised the issue of so-called "Taiwan's participation in the United Nations" this year. The purpose of such an act is nothing but to create "two Chinas", "one China, one Taiwan" in the United Nations. This not only completely runs counter to the purposes and principles of the UN Charter and the UNGA resolution 2758 (XXVI), but also constitutes a brazen challenge to the one-China principle widely recognized by the international community. The Chinese Government and people strongly condemn and firmly oppose such a gross encroachment on China's internal affairs. The Chinese Delegation stated fully the position of the Chinese Government on this question in the letter addressed to Secretary-General Mr. Kofi Annan on 12 August this year. Now, I wish to reiterate the following points:
1. Taiwan has been an inseparable part of China's territory since antiquity. Both the 1943 Cairo Declaration and the 1945 Potsdam Proclamation have reaffirmed in unequivocal terms China's sovereignty over Taiwan as a matter of international law. There is but one China in the world, and the Government of the People's Republic of China is the sole legal government representing the whole of China. This is an objective reality that cannot be changed by anybody. To date, more than 160 countries in the world have diplomatic relations with China. They all recognize the one-China principle, and they all recognize that Taiwan is a part of China. ......
Please see http://big5.fmprc.gov.cn:89/gate/big5/www.fmprc.gov.cn/ce/ceun/eng/

Cairo Declaration Origin of Taiwan Question Says China Chinese Minister of Foreign Affairs Li Zhaoxing told the Journalists on March 6, 2004 "if there are still some people who are not clear about the origin of the Taiwan question, I advise them to study the relevant historical documents together with me, which include the Cairo Declaration in 1943, the Potsdam Proclamation in 1945, Resolution 2758 of the UN General Assemblyin 1971 and the communiques on the establishment of diplomatic relations between China and over 160 countries in the world. All theses documents have recognized in most explicit and accurate terms that there is only one China in the world and Taiwan is part of China." Chinese Premier Wen Jiabao told the Journalists the same thing on March 14, 2004.

Taiwan Response However we studied and found that (1) the Resolution 2758 had nothing to do with the sovereignty of Formosa; (2) the international recognition of Taiwan as a part of China was nothing but modern edition of the Munich Agreement of 1938 betrayed Czechoslovakia for benefits; (3) the Cairo Declaration in the Potsdam Proclamation did not intend to hand over Taiwan to China. The whole story is as follows:

▲China Utilized The Cairo Declaration to Interfere in Taiwan's Internal Affairs
On September 2, 1945 Japan signed the Instrument of Surrender and accepted the Potsdam Proclamation. In Article 8 it read "the terms of the Cairo Declaration shall be carried out." But the Cairo Declaration was not found yet China insisted that it was the Press Communique released by Roosevelt, Chiang Kai-shek, and Churchill jointly, on December 1, 1943 in Cairo, Egypt, promising "Manchuria, Formosa, and the Pescadores shall be restored to the Republic of China." With this, China interfered in Taiwan's election and plebiscite. Let's examine its legitimacy.

▲Cairo Declaration (Chinese edition) Is A Fake！Taiwan Question Nonexistent
1. Wrong document: The paper work China insisted is " the Press Communique" (see attachment 1), while the name of the document in Article 8 of Potsdam Proclamation is "the Cairo Declaration."

2. Not endorsed: Should the Press Communique is the case, it bears no signatures of participants. (see attachment 1)

4. Not accepted: Churchill rejected a suggestion on February 1, 1955 that according to the Cairo Declaration Formosa and the Pescadores be given to China. (see attachment 4)

5. Totally denied: The Cairo Declaration (Chinese edition) stated that Manchuria (the portion of Port Arthur and Dairen) also should be given to China, but Roosevelt and Churchill jointly rejected it by signing the Yalta Agreement and hand them over to Soviet. (see attachment 5)

6. Conclusion: China fabricated the so-called question of Taiwan and fooled the journalists.

▲The Legal Status of Formosa Is As Independent As That of The USA
1. As soon as Formosa was detached from Japan She was entitled to be independent -- UN Charter.
Article 77b of The UN Charter(1945.6.26): The trusteeship system shall apply to territories which may be detached from enemy states as a result of the Second World War.
Article 76b of The UN Charter (1945.6.26): The basic objectives of the trusteeship system shall be ....... towards self-government or independence.

2. Formosa Independence was effective on April 28, 1952 as The Peace Treaty with Japan was in force.
Article 2b of the Treaty (signed on September 8, 1951): Japan renounces all right, title and claim to Formosa and the Pescadores. (Formosa was detached from Japan and independent) 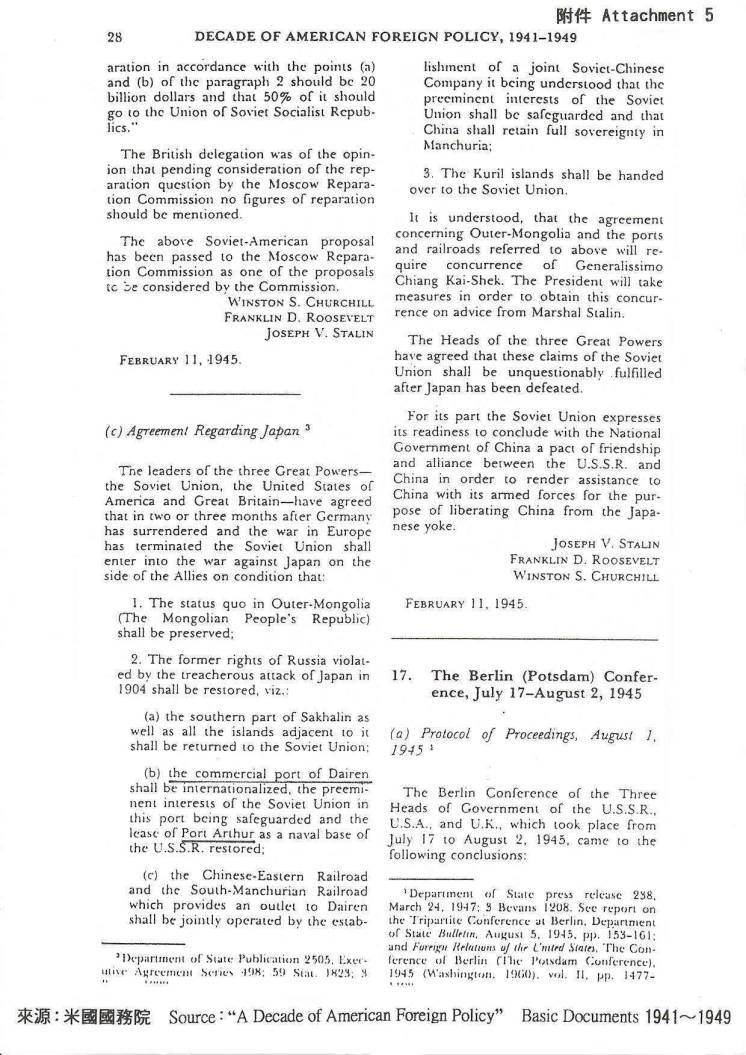